Gonna kick off a sub-series of blog posts, with no consistent timing nor reason amongst the lot of them: "Living The Dream".   Just a series of posts, aiming to do nothing more than shed some light on the life, existence and purpose of a pro water skier. My goal with "The Word" is to give people entertaining things to read, provocative ideas to mentally chew on....and maybe a few challenges to help folks find a new perspective on something. Well, this is a prologue to my response.... to a challenge that seems to have surfaced without much effort.  I will do my best to keep this positive, because nowhere in the words "entertaining", "provocative" or "challenging" is there any sense of inherent negativity.  I'll try hard to keep The Word within those boundaries. The challenge, or attack I could say, is on the very idea of a professional athlete within the world of water skiing.  Wanna know how it came about?  TWITTER!  Can you believe that? The work flow went something like this:   I'll let you chew on that for....well,....as long as it takes me to find a moment to get to chapter 2.  Some are thinking I have all the time in the world...being a pro water skier.  You know who you are. In the meantime, I'll leave you with this thought puzzle: Why is Golf so huge?

How about Cycling, who blew that sport up in America? 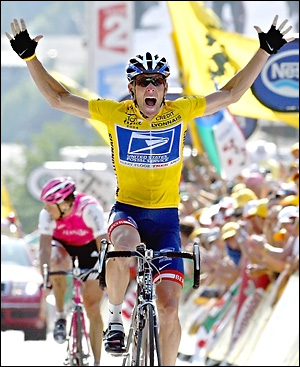 That's right....Mr. Livestrong. Anyone see a trend?  Let me kick start it for you:  Traits these two embody....   The one thing these two did not have:   They weren't wannabe Professionals.  They did their best to be the best of the best, through a life of commitment and sacrifice.  And that is what gave them the power to transcend and transform their respective sports. They are the reason we care about Golf and Cycling. They are icons.   ....end of Chapter 1 rant.   P.S. - for some light reading, and I do say "light" with the utmost sarcasm possible (matter of fact I might have spit a little bit on my computer screen when I said that out loud a moment ago), you can sneak on over to BallOfSpray.com or click this direct link to the Forum, see more about what folks think regarding the subject of Pro Water Skiing, what defines a Pro, and whether or not there is a need for Pro Water Skiing at all.   The Big Dawgs: